The Evelyn Chapman Art Award is a $50,000 scholarship is presented to an Australian painter, male or female under 45. The Award, given every two years, is intended to support a young Australian painter by furthering their art education both in knowledge and artistic practice internationally or in Australia.

The scholarship will cover the reasonable costs of the award winner for a period of 2 years, whilst studying at a recognised and well-established art school or cultural organisation approved by the Trustee, overseas or within Australia.

Entries for the 2022 Evelyn Chapman Art Award are now open

You must read and accept the TERMS AND CONDITIONS OF ENTRY

Short-listed applicants will be advised via email if works are selected as finalists and must submit a proposal outlining the residency/project to be undertaken.

About the Evelyn Chapman Art Award

Born in 1888 in Sydney, Evelyn Chapman was a painter who spent her working career in Australia and Europe. She exhibited in the Salon in France, before travelling to battlefronts of France following the First World War. She became the first female artist to depict the devastated fields, churches and towns of the western front. Chapman retired as painter following her marriage; however she espoused art education and practice, particularly in her daughter.

The Evelyn Chapman Trust, established by the bequest of Chapman’s daughter Pamela Thalben-Ball, will award a scholarship of $50,000 to ‘support a young Australian painter by furthering their art education both in knowledge and artistic practice’. The artist receiving the award will use the scholarship ‘overseas or in Australia, at a recognised and well-established art school or work at an organisation on a program or project that enhances the artist’s artistic skills’.

The Award will be presented to an artist, male or female, under the age of forty five.  Applicants may submit one or more landscape, portrait or still life paintings in oils or tempera – up to a maximum of 3 works. A selection committee of three judges will then come to a consensus on the applicant who displays the highest artistic merit. 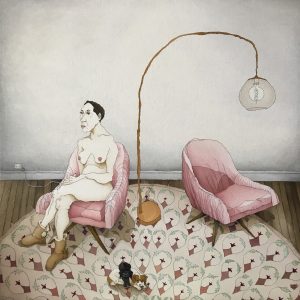 Perpetual, as Trustee, of the Evelyn Chapman Trust together with the S.H. Ervin Gallery has announced artist Caroline Zilinsky as the recipient of the 2020 Evelyn Chapman Art Award.

Award winner Caroline Zilinsky says, “It is the most profound honour to be the recipient of the Evelyn Chapman Art Award. This will mark the embarkation of a new journey that follows in the footsteps of Russel Drysdale, traversing the harsh and rugged parameters of NSW documenting our strange land. With the spirit of Evelyn Chapman at the helm I hope to re-imagine Australia’s identity in the 21st century.”

As the winner of the award, Zilinsky plans to develop a series of work, following research at the Art Gallery of New South Wales, and follow in the footsteps of artist Russell Drysdale’s 1944 exploration of the outback. Drysdale was commissioned by the Sydney Morning Herald to record the effect of the drought conditions in western New South Wales. The publication of his work led to widespread recognition of his skill as a draughtsman while the experience inspired a seminal series of paintings. 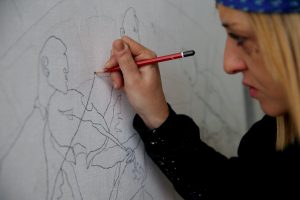 The judges, Ann Cape, Greg Hansell and Yvonne Langshaw commented, “Caroline Zilinsky is a worthy winner of the Evelyn Chapman Art Award as her unique and well executed work demonstrates a commitment to the practice of oil painting. The award celebrates the future of Australian painting as it offers contemporary painters working in oil and tempera a wonderful opportunity and unrivalled freedom to develop their artistic practice and education. The award is important because it encourages the development of painting techniques while helping to create a platform for contemporary artists to forge new paths and further the development of the medium in the future. The quality of the 2020 finalist works is testament to the importance of painting with young artists today.”

Caroline Zilinsky was selected from a finalist group of eight artists each of whom were able to submit up to three paintings and proposal, judged by a panel consisting of artist Ann Cape, artist Yvonne Langshaw, and artist and Head of Royal Art Society of NSW Art School Greg Hansell. 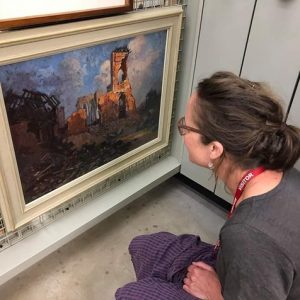 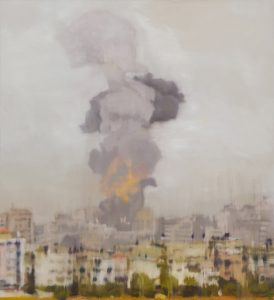 Perpetual, as Trustee, and the S.H. Ervin Gallery  announced artist Kate Stevens as the recipient of the inaugural Evelyn Chapman Art Award, one hundred and thirty years after Evelyn Chapman’s birth. Stevens’ winning work Gaza forms part of an ongoing series exploring how we process images of war from the domesticity of the home which the artist looks to develop using the scholarship. The award provides a $50,000 scholarship for an Australian painter, male or female under the age of 45, to ‘engender the encouragement, development and rewarding of artistic skill, through furthering the training and knowledge and skills of Australian painters.’

Award winner Kate Stevens says, “I felt inspired to enter this prize upon seeing the beautiful black and white photograph of Evelyn Chapman sitting at her easel painting the ruins of the Western Front – a pioneer for women interested in the subject of war, not afforded the opportunity we have today to combine painting and motherhood. It is a great privilege to receive this award and I look forward to using this opportunity to immerse myself in learning about Australia and war today, and the works of Australian war artists, so that I can bring a deeper understanding to a new series of paintings on the subject.”

Stevens has spent the last eighteen months painting images of the ruins of Aleppo from drone footage on YouTube, and a series of explosions in Gaza painted from news photos on her mobile phone. As the winner of the award, Stevens aims to develop this series of work with research at the Australian War Memorial in Canberra and further her understanding of recent experiences of Australians at war and the history of the nation’s war artists.

Caitriona Fay, General Manager, Community and Social Investment at Perpetual said, “The Evelyn Chapman Art award celebrates promising painters across the country. Evelyn Chapman’s legacy has inspired this year’s winner, Kate Stevens, to continue the tradition of Australian women artists capturing war. The quality of the 2018 works proved outstanding and are a testament to the artists we have in Australia. As Trustee, we are proud to support the S.H Ervin Gallery in offering this award on what would have been Evelyn’s 130th birthday, and congratulate Ms Stevens on her win.”

Stevens was selected from a finalist group of seven artists, who each submitted three oil paintings and proposal, judged by a panel consisting of artist Ann Cape, artist Yvonne Langshaw, and artist and Head of Royal Art Society of NSW Art School Greg Hansell.