The National Trust & S.H. Ervin Gallery are situated on Observatory Hill the traditional land of the Gadigal people of the Eora nation.  Historian Grace Karskens notes that “Tallawoladah, the rocky headland of Warrane (Sydney Cove), had massive outcrops of rugged sandstone, and was covered with dry sclerophyll forest of pink-trunked angophora, blackbutt, red bloodwood and Sydney peppermint. The Cadigal probably burnt the bushland here to keep the country open. Archaeological evidence shows that they lit cooking fires high on the slopes, and shared meals of barbecued fish and shellfish. Perhaps they used the highest places for ceremonies and rituals. Down below, Cadigal women fished the waters of Warrane in bark canoes.”¹

Observatory Hill would have been an original contact site between the settlers and Indigenous people however there is little evidence of Aboriginal occupation today. There may be sub-surface evidence, although this is likely to have been disturbed by more than 200 years of European settlement. As the highest point in Sydney it was likely to have been a popular lookout for Aboriginal people.

Aboriginal occupation of the area continued after European settlement from evidence of an Aboriginal camp-site at Moore’s Wharf, Millers Point, with traditional implements and European objects uncovered. A midden site exists between The Rocks and Millers Point in  present day Barangaroo. Another site at Dawes Point of rock engravings of a shark and man were destroyed with construction of the Harbour Bridge.

¹Grace Karskens in The Dictionary of Sydney online 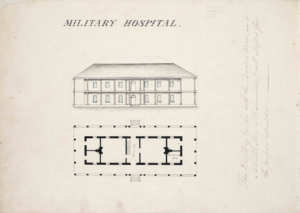 The building occupied today by the National Trust was built as a military hospital by Governor Macquarie in 1815.  It was designed by Lieutenant John Watts (1786-1873), Aide to Macquarie and one of three ‘architects’ in the colony at the time.  Watts based his plan of the hospital on a standard design developed by the royal Engineers, with wide verandas on all sides of the imposing two storey Georgian structure to allow patients to benefit from cooling sea breezes.  In 1848, the troops were moved to the newly completed Victoria Barracks in Paddington.  The Military Hospital on Observatory Hill was closed, and the building entered a new phase in its life.

In 1848, aware of the need to educate the children of the growing colony, the government established the Board of National Education to set up and maintain schools, and the Denominational School Board to run church-founded schools. The Fort Street School (in the former military hospital) was opened in 1850 under a temporary headmaster Hugh Farrell, and in arrangement and management was established as a model school for the National Schools.

The building was remodelled for school needs by the Colonial Architect Mortimer Lewis. He transformed the light Georgian appearance of the old military hospital into a heavier Italianate façade. The wooden verandas were replaced with pilastered arcades. As the boys classrooms were on the ground floor and the girls on the upper floor, the central staircase was removed and a staircase at the northern end of the building was built. The Royal Coat of arms was placed above the main entrance.

In 1851, William Wilkins, Fort Street School’s first headmaster was appointed. He is regarded as a leading figure in education in New South Wales. He introduced new teaching methods and curriculum into the statewide education system through the teacher training program at Fort Street School.

The 1856 building that is now occupied by the S.H. Ervin Gallery is attributed to Henry Robertson. It was built as two classrooms with hat rooms at either end. By 1880 the building that now links the S.H. Ervin Gallery and the offices of the National Trust, (now the Trust Café) were used as classrooms by 1885 and as a library by 1911. In 1891 a further building was attached to the end of the current site of the Gallery, built as a sewing room for the students.

By 1916 the school had grown beyond its capacity and the boys were moved to a new school in Taverners Hill at Petersham, while the original school became Fort Street Girls’ High School. The external stairs were removed and the central staircase was reinstated. The newly created Coat of Arms was installed c1916 in the window above the stairs, where it can be seen today. The motto in Latin translates as ‘Every man is the artisan of his own future’.

The construction of the Sydney Harbour Bridge in the 1920s required the resumption of a large portion of the school land and the demolition of some school buildings. Overcrowding and deteriorating buildings led to the closure of the school in 1974, when it was considered to be more economical to build a new school rather than restore the old. After 124 years of continuous service as a school it became the headquarters of the National Trust.

In 1975 the National Trust Centre was opened with its offices in the wards and rooms of the old military hospital and in the 1891 sewing block. The S.H. Ervin Gallery opened in 1978 in the 1856 building with the Trust Café located in the building that links both.