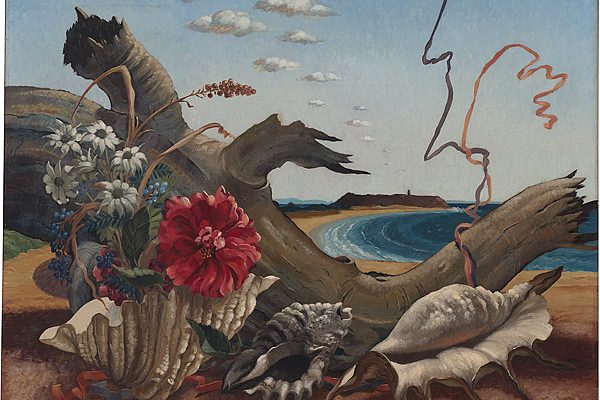 Since their first acquisition in 1990, Sydney art lovers and philanthropists James Agapitos OAM and Ray Wilson have been passionate collectors of Australian Surrealist paintings, photographs, prints and drawings. Their collection contains more than three hundred works spanning the period 1925 to 1955 and is unrivalled by any other public or private collection.

Australian Surrealism comprises some ninety paintings and works on paper by thirty-five artists from that Collection, displayed publicly together for the first time. It also provides a rare insight into the dedication and passion of two extraordinary men.

Surrealism was one of the most dynamic and diverse art movements of the twentieth century. Inspired by the writings of André Breton and the paintings of Salvador Dali and René Magritte, Australian artists in the 1930s and early 1940s examined their own culture through a similar lens, producing distinctive results. Employing dream imagery, poetry, precarious and suggestive juxtapositions, artists responded to a political environment, which was drawing the nation toward war.

“The complex composition [of Surrealist works], the symbolism and the vision of their creators stimulated us greatly,” says James Agapitos OAM, a businessman who migrated from Greece to Australia in 1952. He met his Melbourne-born partner, Ray Wilson in 1967 and together they began to collect works of art.

The first Surrealist work purchased by Agapitos and Wilson was James Gleeson’s seminal painting, The attitude of lightning towards a Lady-Mountain, 1939, which they discovered at auction in 1990 – “the painting was totally different from anything we had seen before and we were mesmerised” James explains, “this one painting was the foundation stone around which The Agapitos / Wilson Collection was built.”

When a major exhibition of Surrealism was organized by the National Gallery of Australia in 1993, their passion for the subject was truly ignited and they became aware that Surrealism was not simply a European tradition but also has a rich history in Australia.

James Agapitos and Ray Wilson regard their Collection as an intrinsic part of Australia’s cultural patrimony.  They hope that this exhibition, and the accompanying publication, will make it available to a wider national and international audience, and that their proposed gift of the entire collection to a public institution will return it to the ownership of all Australians.

Australian Surrealism is curated by noted art writer and broadcaster, Bruce James who is the curatorial consultant to Agapitos and Wilson and the author of a comprehensive new book about their collection. An Art Gallery of South Australia Travelling Exhibition

This exhibition is supported by Visions of Australia, an Australian Government Program supporting touring exhibitions by providing funding assistance for the development and touring of cultural material across Australia.