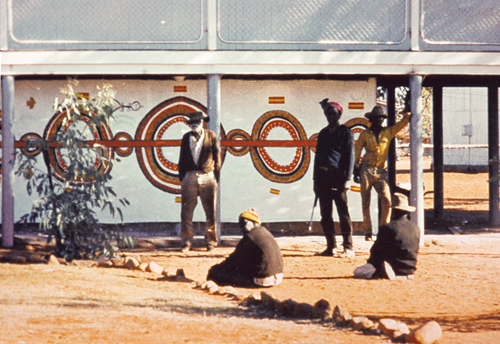 The painters of the western desert had been painting for tens of thousands of years but it was only in 1971 that a band of men began making paintings, of their own design, that were destined to change the Australian art landscape forever.

This exhibition celebrates 50 years of painting with seminal works from every decade that document the changing times and artists who defined the era.

The Papunya Tula Art Movement began in 1971 when a school teacher, Geoffrey Bardon, encouraged some of the men to paint a blank school wall. The murals sparked off tremendous interest in the community and soon many men started painting. In 1972 the artists successfully established their own  cooperative, Papunya Tula Artists.

The settlement at Papunya, 240km north-west of Alice Springs.was established in 1959 as an administrative centre by the government for the Aboriginal people who had moved in from the desert. Settlements such as Papunya were established by successive Australian governments under the controversial policy of assimilation. Papunya’s residents were mainly of the Luritja and Pintupi language groups, but its residents also included people from the Anmatyerr, Warlpiri and Kukatja groups. Some of the Pintupi men had very limited contact with Europeans as their traditional country lay hundreds of kilometres west of Papunya in the Gibson Desert, where they had lived as hunter-gatherers until the 1960s. For many Pintupi, Papunya was their first experience of life in a European settlement.

The Papunya Tula painting style derives directly from the artists’ knowledge of traditional body and sand painting associated with ceremony. To portray these dreamtime creation stories for the public, has required the removal of sacred symbols and the careful monitoring of ancestral designs.