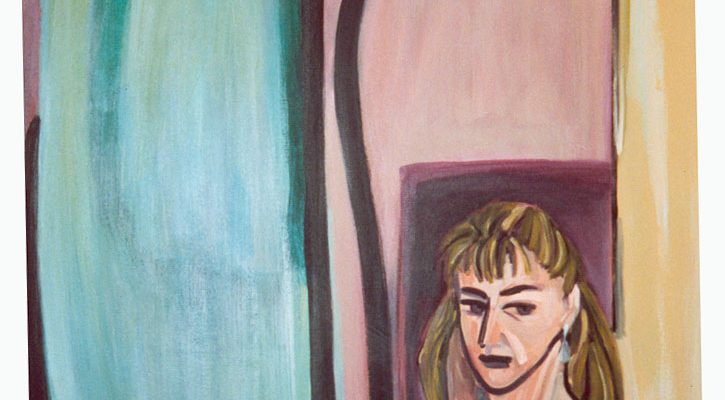 The Portia Geach Memorial Award is the highly-esteemed portrait prize for women artists was established by Florence Kate Geach in memory of her sister in 1965 and has become synonymous with the developing profiles of women artists. The $18,000 award is available ‘for the best portraits painted from life of some man or woman distinguished in Art, Letters or the Sciences by any female artist resident in Australia…’ .

Of the 310 entries this year, 57 were selected and include works by some of Australia’s leading artists, such as Cherry Hood, Esther Erlich, Wendy Sharpe, Rosemary Valadon, Lucy Culliton, Maryanne Coutts and Mary Moore. Artists and figures from the art world have featured heavily as subjects of portraits, including artists Robert Klippel, Rosemary Madigan, Janet Laurence, John Coburn and art dealers Eva Breuer and Michael Nagy.

This year’s winner was Sydney artist Vicki Varvaressos with her work Self Portrait with Painting. Portraits by Lucy Culliton and Cherry Hood were highly commended by the judges.

Sunday 13 October –  Meet the winner! Andrew Sayers, Director of the National Portrait Gallery, will speak with the winner of the 2002 Portia Geach Award, Vicki Varvaressos. Also Jo Bertini on her double portrait of Robert Klippel and Rosemary Madigan.

Past Winners of the Portia Geach Memorial Award

2002 – Vicki Varvaressos, Self Portrait with Painting

1995 – Wendy Sharpe, Self Portrait with Students, After Adelaide Labille-Guiard

1970 – Dora Toovey, Self Portrait in Landscape