First awarded in 1965, The Portia Geach Memorial Award was established by Florence Kate Geach in memory of her sister, artist Portia Geach. As per the direction of the will, the Award is annually presented to an Australian female artist for the best portrait painted from life of a man or woman distinguished in art, letters or the sciences. Geach was widely acclaimed as a leading artist and was a frequent commentator in the national media – making her an iconic figure in the Australian arts community. The Portia Geach Memorial Award is awarded by The Trust Company as trustee, to the entry with the highest artistic merit.

Painter Prudence Flint has been named the winner of the 2010 Portia Geach Memorial Award for her work Scrambled egg. The award is open to female Australian artists and is restricted to portraits.

Flint’s painting depicts a woman beating eggs, with broken eggshells scattered across the kitchen table around her. She notes: “In this painting I wanted to capture the intimate act of transforming one thing into another.” 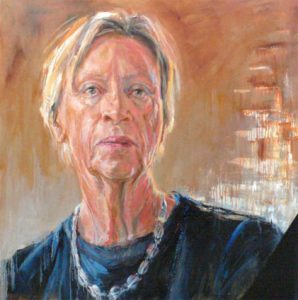 The People’s Choice for 2010 was awarded to Danelle Bergstrom, Independent Spirit (pictured left), a portrait of artist Ann Thomson.

This is the fourth time Bergstrom has won the People’s Choice prize at the Portia Geach Memorial Award, with previous wins for portraits of Nancy Borlase (2006), Inspector Michael Hobbs (2005) and composer Peter Sculthorpe (2009).

Melissa Beowulf, If all else fails…! Michael Kempson

Rachael Brook, The Gent and the Unicorn, Michael Zavros

Jessica Geron, Max and Me, Self Portrait with Son

Sophie Hann, In My Studio, Self Portrait

Juliet Holmes á Court, Yours in Paint, Self Portrait

Joanna Kitas, And This Too Shall Pass, Self Portrait

Sue Marshall, Self = Portrait Self Portrait

Bridgette McNab, Woman in a Red Dress, Self Portrait

Claire Stening, The Year 2009, Self Portrait

Pam Tippett, Self portrait (for a change), Self Portrait

Katherine Uren, Portrait of the Artist in Character, Self Portrait

Frances Wiedersatz, What Next?, Self Portrait