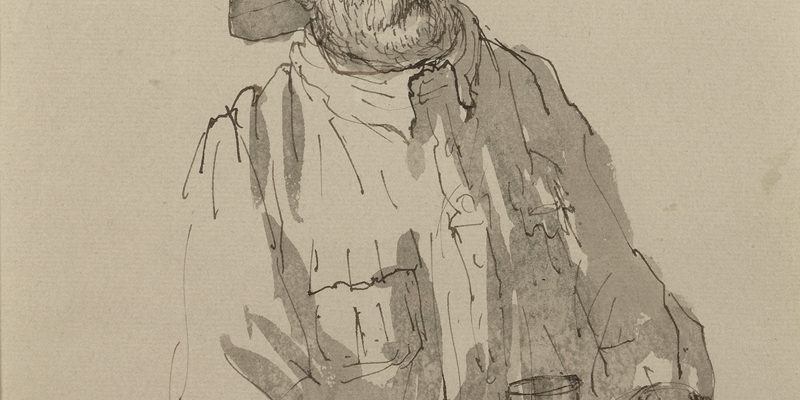 This year, 2012, marks the centenary of the birth of Russell Drysdale, one of the greatest Australian painters of the twentieth century.  To celebrate this iconic Australian artist, the S.H. Ervin Gallery will be showing over 60 drawings in the exhibition Russell Drysdale: The Drawings, curated by Lou Klepac.

Coming into prominence during the 1940s amid the cultural and social changes precipitated by the Second World War, Drysdale initiated a new vision of the Australian landscape which replaced the pastoralism of the Heidelberg school.   He transformed Australian painting, providing a penetrating view more in line with modern ideas and perceptions.  Drysdale revealed the vastness, emptiness and dryness of the landscape and its effects on the people who survived in these sparse, arid conditions.

Drawing was always vital to Drysdale and it was while he was in hospital, passing away time by drawing, that his talent was noticed.  This led him to studying at George Bell’s school in Melbourne, laying the foundation for his future life as a painter.  Drysdale is known for a series of highly imaginative and wonderful paintings such as The Drover’s Wife, The Cricketers, West Wyalong and many exceptional paintings of Aboriginal figures.  He was a prolific draughtsman, for which drawing was the basis of all his work.

In 1980 Klepac organised the Drysdale Drawings exhibition in Perth, and a retrospective of Drysdale’s paintings at the S.H. Ervin Gallery in 1985.  Lou Klepac was also a close friend of Drysdale, who appointed him his literary executor before his death in 1981.  Russell Drysdale: The Drawings will tour to Carrick Hill, Adelaide and Mornington Peninsula Regional Gallery following the exhibition at S.H. Ervin Gallery.

Sunday 11 March, 3pm – Richard Perram, Director, Bathurst Regional Art Gallery, discusses the Hill End images in the exhibition and the enduring appeal of this former gold mining town to artists past and present

Sunday 25 March, 3pm Join the DiVerse Poets as they respond to the Russell Drysdale works.