The Promised Land: The Art of Lawrence Daws 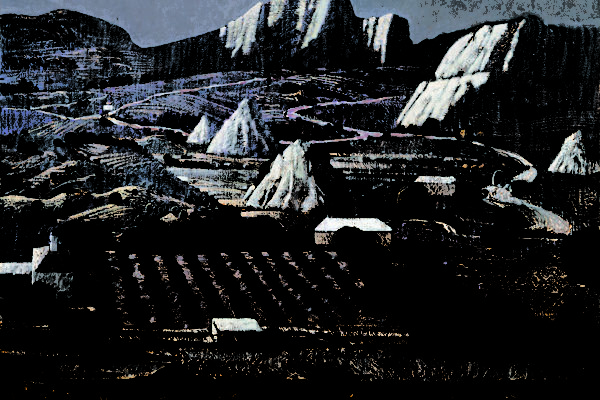 The Promised Land: The Art of Lawrence Daws

His studio was a haven for prominent Australian artists, with Daws having forged friendships with Brett Whiteley, John Olsen, Tim Storrier and Donald Friend. Lawrence Daws’s first public exhibition in Australia was in 1954, Group 4 at the Victorian Artists’ Society Gallery in Melbourne. Group 4 artists included Daws, Donald Laycock, Clifton Pugh and John Howley.  In 1962 Daws and two of his close friends, Brett Whiteley and Charles Blackman, had their first London solo exhibitions at the Matthieson Gallery.

While early influences on his career included Hans Heyson, Arthur Streeton and Lloyd Rees, over the years Daws developed more of a passion for symbolism and his work became laden with his own personal lexicon of images. His distinctive landscape style has developed from a combination of influences including writings by Freud, Jung, the tarot and alchemy.

One of Daws’ favourite quotes is by Hermann Hesse, “The true profession of a man is to find his way to himself.” And through this current retrospective we gain insight into this continuing journey for Daws.

Curated by Bettina MacAulay and Desmond MacAulay, The Promised Land contains over 50 paintings, drawings and sketch books. Lawrence Daws’ work has been included in over 40 group exhibitions at public and private galleries, as well as over 70 solo exhibitions. An early retrospective of his work was held at the Art Gallery of South Australia in 1966 and more recently, in 2000, a survey exhibition was held at the Brisbane City Gallery.

Join tarot consultant, Jennifer Houston as she discusses the tarot and its ancient symbols including those appearing in works of artist Lawrence Daws. The afternoon will also give gallery visitors the opportunity to have their cards read by Jennifer – Cost $15 for 10 minute reading.

Jennifer Houston is the Sydney coordinator for the Tarot Guild of Australia and teaches numerology, tarot reading and psychic pathways at the Nature Care College in Sydney.  She also teaches WEA courses on astrology and self discovery. She is a professional astrology and tarot consultant, astrologer and numerologist.  She is also a regular speaker for the Tarot Guild of Australia.

Join the DiVerse Poets- Brenda Saunders, Sheryl Persson, Margaret Bradstock, Louise Wakeling & Rob Kennedy- as they transcribe poems from the art of Lawrence Daws for an afternoon of personal, original prose from some of Sydney’s finest poets.