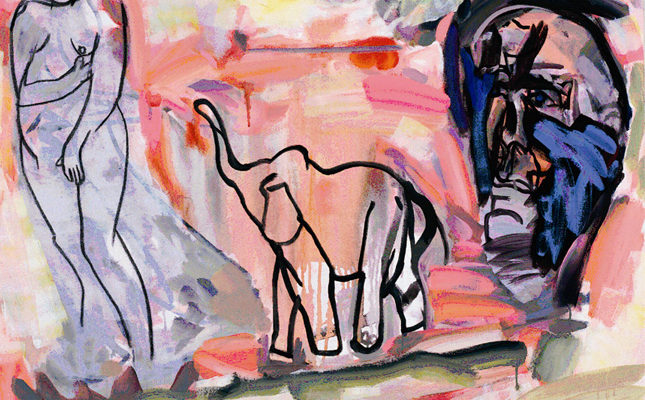 Bill Brown’s exceptional body of work in this retrospective survey show 1964 – 2014, shows his pursuit of the authentic mark and his relentless struggle for truth.  He is one of the most respected figures in Australian visual arts and this exhibition celebrates his contribution as an artist, presented in this first ever retrospective survey of his considerable oeuvre. Curated by Christopher Hodges, Bill Brown: Wanderlust is a body of work that gives resonance to the title ‘artist’ as well as recognising his enormous influence over a generation of younger artists. He taught drawing and painting at the National Art School from 1970 to 2009.

Born in Cowra in 1945, Bill Brown moved as an infant with his family to Parramatta where he attended school. Following his youthful artistic aspirations Brown embarked as a trainee artist with the advertising firm J. Walter Thompson in 1961 while attending night classes at the National Art School, Sydney. Encouraged by artist Godfrey Miller, he commenced full-time studies at the School between 1965-67, and was awarded the National Art Students’ Club Prize in his final year.

Brown’s first exhibition was at the legendary Rudy Komon Gallery in 1968 where one of his horse race paintings was acquired by the Art Gallery of New South Wales. After this early success Brown suffered a loss of confidence and from the 1970s his works shifted towards an abstract idiom however were not as well received despite his winning the Georges’ Invitation Purchase Prize in 1973. This was also at the time the ‘avant garde’ was embracing conceptual art and painting was declared ‘dead’. Brown’s uncertainty continued however he resolved to remain committed to painting and sustained his drawing practice. He commenced teaching painting and drawing at the National Art School in 1970 and retired in 2009. He also lectured at the Faculty of Architecture at the University of Sydney and Sydney College of the Arts.

Brown retreated from exhibiting in the 1990s and early 2000s yet continued painting.  His exploration of the process of art deepened during this period, through extensive reading into philosophy and poetry, personal self-discovery and the daily routine of his art practice. He emerged in 2008 and 2010 with two exhibitions demonstrating his personal vision founded on intuitive response to the world at large and a belief in the value of intrinsic reasoning over extrinsic rationale.

Bill Brown has held more than 20 solo exhibitions since 1968 and he is currently represented by Janet Clayton Gallery. His work has been featured in prestigious group exhibitions including the 4th Biennale of Sydney (curated by William Wright) and Australian Perspecta ’85 (curated by Tony Bond).

The Wild One: an unpredictable painter has taken a winding road to greatness – John McDonald, Sydney Morning Herald, Spectrum, 3/5/2014

Sunday 11 May, 3pm  TALK:  Join Laura Fisher for a discussion on her catalogue essay and hear stories about the life and paintings of Bill Brown