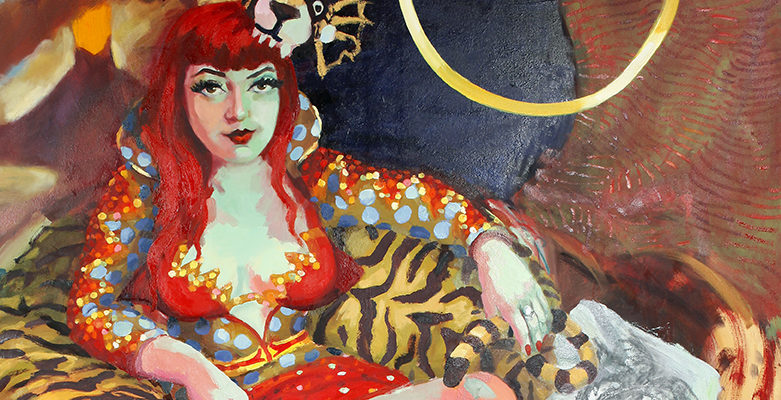 Each year the Salon panel goes behind the scenes of the judging process, to select an ‘alternative’ exhibition from the many works not chosen as finalists for the official exhibition.  The criteria for works selected are quality, diversity, humour and experimentation.  This year’s selectors include Catherine Benz, curator, Delmar Gallery, Kon Gouriotis OAM, curator & editor, Art Profile & Jane Watters, S.H. Ervin Gallery Director.

Our panel viewed the unselected entries from the 830 Archibald Prize and 710 Wynne Prize entered at the Art Gallery of New South Wales to select the 64 works for this alternative exhibition.

The Salon des Refusés exhibition at the S.H. Ervin Gallery has established an excellent reputation that rivals the selections of the ‘official’ exhibition with works which examine contemporary art practices, different approaches to portraiture and responses to the landscape.

The Salon des Refusésfollows the tradition made famous by Napoleon lll in Paris. He insisted that the huge number of works which had been rejected by the Academy for that year’s Salon, be displayed for the public to view and judge.  The very first Salon des Refusésincluded works by Manet and Pissarro.

Visitors to the annual Salon des Refusés exhibition can vote for their favourite artwork in the Holding Redlich People’s Choice Award, the winner of this much anticipated award will be announced on 15 September 2016.

Sunday 24 July, 3pm Artist Ann Thomson will discuss her artistic practice and talk about the painting selected in this year’s Salon des Refusés

Sunday 14 August, 3pm  Salvatore Zofrea is joined by his sitter Maria Venuti to share their story on the creation of the portrait of Maria.

Sunday 4 September, 3pm Kon Gouriotis, editor Artist Profile magazine was on the selection panel for this year’s Salon exhibition and shares his insights into the process. He will be joined by exhibiting artist Steve Lopes who will discuss his work.

Sunday 11 September, 3pm Wendy Sharpe, Steve Salo and McLean Edwards join us to discuss their paintings selected in this year’s Salon des Refusés and the state of contemporary portraiture.

Sunday 18 September, 3pm  Join us on the final day of the exhibition to hear from artists Robert Malherbe, Ben Smith and Leslie Rice.

The winner of the Holding Redlich People’s Choice Award this year was Tianli Zu for her portrait of South Australian Federal Labor Senator, Penny Wong, titled The Senator and Ma.