The art of Chris O’Doherty aka Reg Mombassa 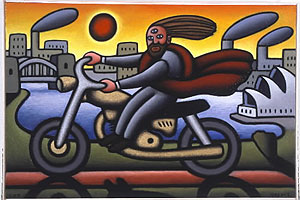 The art of Chris O’Doherty aka Reg Mombassa

Sunday 14 January    Haydn Keenan, director, smartstreet films, talks about his new documentary, Golden Sandals the art of Reg Mombassa the film is screening during the exhibition

Sunday 25 February    Artist, Michael Bell, first saw O’Doherty’s paintings in a exhibition 30 years ago. Since that time he has become a fan, admirer and a friend. Bell will present a personal overview of the exhibition.