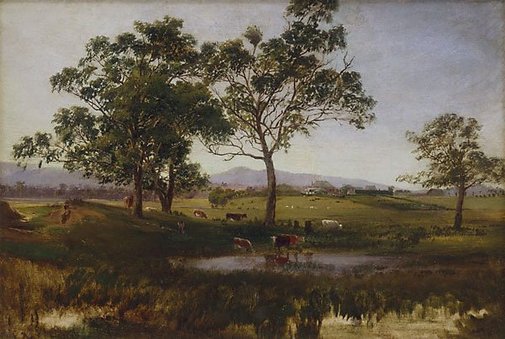 An established tradition in British art from the 17th century onwards, the commissioning of house portraits became increasingly popular in the 18th century, with artists such as J.M.W. Turner, John Constable, Richard Wilson and William Marlow being highly sought after for their paintings of country estates. For centuries, wealthy patrons had employed artists to produce portraits of beloved family members and animals. It was fashionable for the well-to-do to have their houses and gardens similarly recorded for posterity. Depictions of country properties were particularly highly prized – a view of a country estate was frequently commissioned to hang in a patron’s town residence, as a ‘visual reminder of the pleasures of the rural seat’.

It is not surprising that by the early 1800s a flourishing market for views of private homes was emerging in colonial Australia. The earliest of these images were produced predominantly by convict artists, and chiefly in the ‘older’ colonies of New South Wales and Van Diemen’s Land.

Commissioned in ever greater numbers, depictions of private homes came to represent an important source of income for many colonial artists, including Eugène von Guérard, Louis Buvelot, William Tibbits, Conrad Martens, Nicholas Chevalier and Thomas Clark. The pictorial legacy left by the 19th century painters of house portraits not only gives evidence of the origins of Australian artistic patronage, but also provides an insight into the cultural and social aspirations of successful colonial landowners.

The exhibition  curated by Tracy Cooper-Lavery withworks loaned from the most significant public collections in Australia.

Sunday 31 July            Kate Grenville – Acclaimed author, delves into her family’s colonial past with her new novel, The Secret River, set in the Hawkesbury Region, NSW in 19th century.  The  works of Cobham Hall at Wiseman’s Ferry in the exhibition were inspirational for the author in the research for the book. A book signing followed the talk.

Sunday 14 August      The Outback House comes to Observatory Hill – Ivo Burum, executive producer, is joined by cast members, Adam Carter (station hand) and Fiona Schubert, (the second governess) in discussion of the trails and tribulations of replicating life on the land in colonial times, making  the ABC TV series, The Outback House.